I’ve thought about making Martha Rose Shulman’s spicy Tunisian carrot frittata at least a dozen times. Whenever I paged through her book, The Very Best Recipes for Health, the frittata’s brilliant color smiled at me and its spices winked. 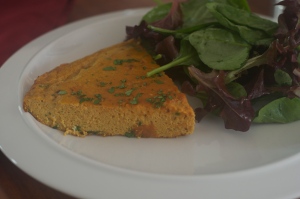 But I could predict The Professor’s enthusiasm — or lack thereof. “Another time,” I’d tell myself. Well that time finally came — last weekend, when friends  were coming over for brunch.

After I’d pureed a pound of carrots and mixed them with the eggs, and made some harissa (using a recipe I found online and making a few substitutions for ingredients that I didn’t have), I began to worry. Home-made harissa? Carrot frittata? Why was I serving my friends such an experiment? My mother would never be so foolish. Damnit.

But there was no turning back. And I’m glad that I didn’t, as my guests asked for seconds — and The Professor gave the dish a “B+ verging on A-.”

This is not your average frittata — a wedge of eggyness studded with vegetables, cheese, whateveryourpleasure. The spices give the dish some surprising zing (surprising for a frittata, at least). The heat of the harissa nicely balances the sweetness of the carrots, and the flavors suffuse the dish.

“On taste, this is nice,” said The Professor. “The flavor is good, and it’s certainly interesting.”

The frittata’s only weakness: satisfaction. I’d served it with a salad and a baguette, and split the 10-inch pie four ways.  “It’s OK for brunch,” he said. “But for dinner I’d want something more — even if it’s just some good bruschetta.”

So I’ll be thinking about something else to serve with the frittata that would push it over the fence into A territory.

Last night I cooked Martha Rose Shulman’s spinach and fresh herb frittata with walnuts and yogurt from her book, Recipes for Health. Shulman describes it quite wonderfully as “a little garden” and she’s right. It is just packed with flavorful greens. 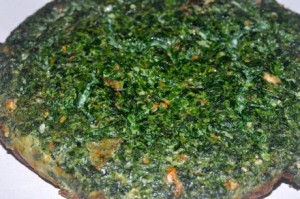 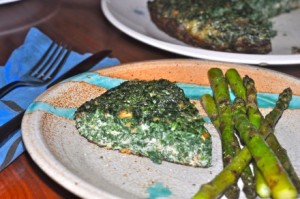 I thought it was delicious. But The Professor … well, not so much.

“It’s definitely different,” he offered as a first comment, and I knew where we were headed. “But I don’t love it.”

He took another bite and added, “If it were on the menu at a restaurant I wouldn’t order it.”

I decided not to ask him for a grade.

But he did explain what he liked and didn’t like about the dish. The big problem was the flavor — it turns out that The Professor doesn’t like mint and I had added a generous handful, along with some tarragon and almost a full bunch of parsley. “Mint should be used sparingly,” he said.

Mint should be used sparingly! Did he think he was some kind of Kitchen Oracle? Offering cooking koans? I was starting to get angry.

‘What about mint tea and mint chocolate chip ice cream?” I thought to myself. Peppermint Patties and Candy Canes! Explain that, Mr. Kitchen Oracle!

But before I said anything, The Professor started talking about what he liked, and he did like the basic idea, which he described as something between a frittata and a quiche.

He liked that the spinach and herbs had been chopped fine and mixed well with the eggs so that every bite had lots of flavor. He liked the crunchiness of the walnuts. He said it was worth trying again.

And I will. In the meantime, here is Shulman’s recipe. I used five eggs and one cup of egg whites rather than eight whole eggs. If you try it, let me know what you think.

These roasted red peppers have been part of my mom’s dinner party repertoire for years. And when I made them for a recent preschool parents potluck they disappeared.

My mom refers to them as “Betsy’s Peppers,” after the friend who gave her the recipe. Betsy was enviably fashionable and seemed to know anyone and everyone interesting. When in London, where she lived a third of the year, she socialized with Rose Gray and Ruth Rogers, the duo behind the River Cafe. In The Cafe Cookbook, Gray and Rogers include a recipe so similar to Betsy’s that I began to suspect that she had gotten the recipe from them. My mom thinks otherwise, in part because, sadly, Betsy died before that book was published. So I will continue to call them Betsy’s Peppers.

Last week, I served them for dinner alongside a leek frittata and a salad. 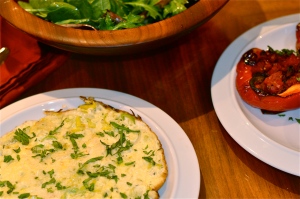 A leek frittata, accompanied by roasted red peppers and a simple salad

“I’d eat this again,” The Professor declared when his plate was clean. A grade will come the next time I  serve it. In the meantime, here’s the recipe:

In a bowl, mix the tomatoes, garlic, olives, basil, olive oil, and salt and pepper.

Halve each pepper vertically, remove the seeds, and coat lightly with olive oil.

Spoon the filling into the pepper halves, and bake for roughly 45 minutes. You want the peppers to be cooked enough that they lose their crispness and get a bit charred, but not so much that they get very soft and lose their structure.